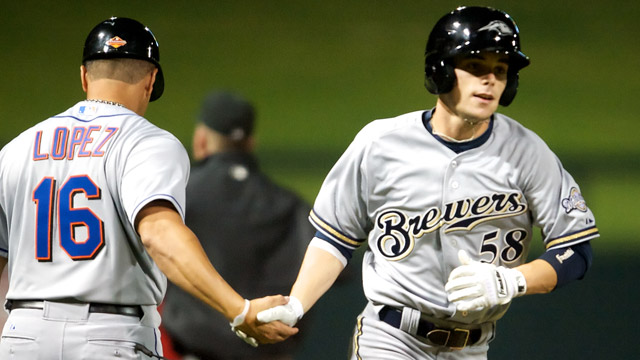 Scooter Gennett slugged his way to a fantastic 2011 AFL showing

The 2011 MLB Arizona Fall League saw many of the league’s top prospects flourish and develop into much more well-rounded players in just a few weeks’ time.  Milwaukee Brewers prospects Scooter Gennett, Jed Bradley, Zealous Wheeler and many other youngsters also bettered their games sumptuously, leading the Peoria Javelinas to a 16-19 overall record in the meantime.

Now that the AFL has come and gone, how did each Brewers prospect grade out and how will their performance better or worsen their future with the club?  Let’s find out.

Acknowledged by many to be one of the few “untouchable” prospects remaining in Milwaukee’s barren system, Gennett, 21, thoroughly backed up his claim as Milwaukee’s second-baseman of the future this fall.  The 5’9″ 164-pound Florida State product finished second among all AFL batters in BA, and ranked just behind Bryce Harper — yes, that Bryce Harper — for the league’s ninth best OPS.  His .470 OBP also ranked fourth-best.  Gennett is expected to make an appearance in double-A sometime next season, and is well-aware of the difficulties awaiting him at the next level.  Overall, though, the speedy infielder was nothing short of sensational in his stay in Arizona this fall.  Great player, bright future with the Brewers.

It’s amazing to hear how few people are aware of Wheeler’s presence in Milwaukee’s system.  At 24 years of age, the youngster has already has five surprisingly productive seasons under his belt.  This fall, the 19th-round selection out from 2007 virtually duplicated his BA from last season (.272) but was mediocre at best even in a batter-friendly league.  Many compare his versatility to Jerry Hairston in that he can play just about anywhere when asked.  Regardless, his performance this fall neither bolstered nor diminished his potential future with the Brewers.

While there’s simply no denying Davis’ physical attributes — his 8.2 SPD rating last season in class-A advanced is comparable to Jose Reyes’ 8.4 — many point to his inconsistencies at the plate as a serious cause for concern moving forward.  Last season, the Tennessee product batted a lousy .245 along with an abhorrent .287 BABIP in the Florida State League.  However, his .325 BA this fall comes as a refreshing statistic, without question.  If he’s able to maintain this momentum into next season, he could be suiting up for triple-A Nashville as soon as 2013.

Now 25 years old, Schafer spent time in class-A advanced, double-A and triple-A last season on his road to recovery from a broken foot suffered back in 2010.  Needless to say, the youngster bounced back impressively, batting a combined .315 with 5 HR, 43 RBI  and 16 stolen bases, and was able to earn a September call-up.  This fall, Schafer ranked among the top hitters in terms of BA and OPS (.812).  He’s a steadfast batter and great fielder who could may very well end up on Ron Roenicke’s depth-chart this spring with Milwaukee’s uncertainties in the outfield.  Granted, he could’ve done more this fall, but it was nonetheless a stately AFL debut for the budding star.

While I’d love to sit here and brag about Scarpetta’s great stuff and tremendous upside, it’s only appropriate for me to dwell on his command issues and subsequently despicable AFL campaign.  Once a top-caliber prospect in Milwaukee’s system, Scarpetta, 23, has since seen his stock falter tremendously over the past few seasons.  Accruing such an unattractive ERA this fall probably isn’t what scouts were expecting.

Youngster flashed instances of a bright future in his first go-around against the competition.  Don’t let the 6.48 ERA fool you — too small of a sample size.  Grade: N/A

You can interpret the obscene ERA to your liking.  Terrible campaign for the tall left-hander.  Grade: D-

A veteran prospect with a dwindling future, Kintzler certainly didn’t turn things around after his fall outing.  Grade: D-

Again, yet another unfruitful ERA for a Brewer reliever.  However, his above-average strikeout abilities are something to take note of heading into next season.