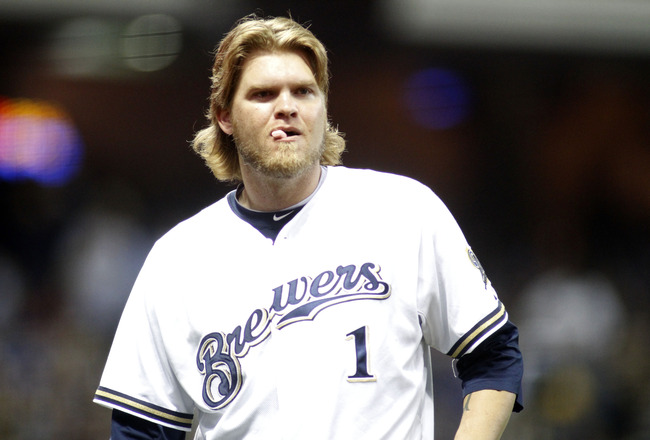 In any other off-season, you’d be labeled insane if you believed any player on the Milwaukee Brewers’ roster beyond Ryan Braun and Prince Fielder would have a legitimate shot at taking home the National League’s Most Valuable Player Award.

Then again, this past offseason has been anything but ordinary.

After one of the most forgetful winters in recent memory (Fielder leaving through free-agency and Braun inheriting a 50-game suspension under MLB‘s Joint Drug Prevention and Treatment Program to start his 2012 campaign) the offensive hierarchy in the Brewers’ lineup has been all but obliterated.   This, in turn, will give a number of players an opportunity to make a statement to the franchise and fanbase by leading the team and shoulder the proverbial load to start next season.

But if there’s one player who seems poised to separate himself from the pack, assume the “leader” role of the clubhouse and push for the National League’s Most Valuable Player Award with Braun and Fielder likely out of the picture, you need not look farther than Corey Hart.

At 29 years old (he’ll turn 30 in late March), Hart is widely considered to be one of the better outfield talents in the game today, and he is still very much in the prime of his career as far as production would lead you to believe.  Granted, he’s no Albert Pujols by any stretch of the imagination, but there’s something to be said about what Hart has accomplished up to this point in his career.

In four true seasons as a starter (excluding an injury-plagued 2009 campaign), he’s averaged a .283 BA, 25 home runs, 84 RBI, and a .508 slugging percentage per season.  Keeping in mind the fact that he’s missed (on average)12 percent of each season do to injury, that’s pretty impressive.

Last season, Hart batted .285 with 26 home runs despite missing all of April due to injury.  His 18.92 AB/HR (at-bat per home run) ratio was comparable to Braun’s 17.06 AB/HR, believe it or not, and his .510 slugging percentage ranked fourth among all NL right fielders last season.

Yet his impressive offensive production isn’t where Hart’s game ends, like many of the MVP-caliber players that have come and gone through the years.  He also has the ability to be crafty on the base-paths and play solid, if not above-average defense.

In 2008, the year Hart was selected to the All-Star team, he notched 23 stolen bases on his way to a 6.2 SPD (speed score) according to fangraphs, topping 2008 AL MVP Boston Red Sox second baseman Dustin Pedroia’s 5.6 SPD.  If not for injury, it’s presumable that Hart would have maintained his success into the seasons following.

Defensively, Hart carries a career .988 fielding percentage and 2.10 range factor.  Last season, he committed just two errors on his way to a .992 fielding percentage that ranked fifth among all MLB right-fielders, noticeably better than the likes of Jeff Francoeur and Torii Hunter – two of the most reputable outfield defenders in history.

Seldom do you find a player who excels at every phase of the game quite like Hart (five-tool players aren’t exactly a dime a dozen), and I think that speaks volumes to what he could accomplish in an injury-free season for the Brewers, who even without Braun or Fielder, still have a very capable lineup.

With a healthy start to spring training and the absence of two preeminent sluggers, 2012 may very well turn out to be a breakout, MVP-worthy season for Milwaukee’s 29-year-old right fielder.