Fully realizing America’s attention is fixated on the Super Bowl (I like the Patriots over the Giants in a close shootout, 27-24), I figured now would be the perfect time to get some thoughts down on how the NL Central will shake out this season.  We’re just days away until pitchers and catcher report to spring training and opening day is just around the corner, believe it or not.  Let’s go ahead and break-down each team’s offseason transactions as well as how I think the division will shake out before preseason action gets under way. 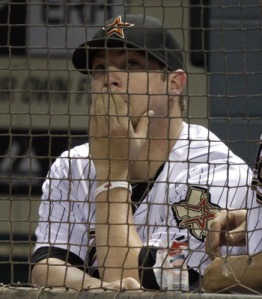 Breakdown: No matter how you slice it, the Houston Astros were simply awful last season.  They finished with MLB’s worst regular-season mark at 56-106 and were statistically atrocious in nearly every facet imaginable.  Trading Hunter Pence and Michael Bourn at the deadline for young talent may be one positive for the Astros moving forward, however, there’s no denying that manager Brad Mills won’t have much offensive firepower to work with to start next season.  It should be interesting to see how his opening-day lineup looks.  Houston ranked 28th in team ERA (4.51) and 26th in BAA (.266) last season, and failed to bring in any noticeable pitching to help bolster their dismal staff.  Still, Wandy Rodriguez, Bud Norris, Brett Myers and J.A. Happ are three respectable arms that make up Houston’s rotation.

Why they’ll finish here: Every team in the division managed to improve in one way or another this winter with exception to Houston.  The fact is, they’re just not ready to compete.  Look for 2012 to be another rebuilding year for the Astros as they try and work in their bevy of acquired prospects.

Breakdown: The Pirates showed massive signs of improvement early on last season, particularly on the mound.  Prior to the All-Star break, they ranked eight in team ERA (3.44), sixth in saves (27) and 18th in BAA (.256).  Their stellar pitching carried them to a 47-43 overall mark at the All-Star break, however, things would only go south from there.  Post All-Star break, their staff posted a 4.78 ERA and allowed a opponents to bat .288.  Needless to say, their offensive offered little to no support, ranking 28th in runs (256), BA (.241) and OBP (.301). Losing Ryan Ludwick will have an obvious impact to their offensive production.  However, they were able to make up for it by adding Clint Barmes, Casey McGehee as well as bringing back Nate McLouth.

Why they’ll finish here: While there’s no doubting the Pirates are a young team on the rise with a ton of potential, the stiff competition in the NL Central will limit their success in 2012.  They were able to add some pieces this offseason, but they’re talent just isn’t ready to go toe-to-toe with the rest of the division.

Breakdown: The Cubs have clearly elected to go young with Theo Epstein and Jed Hoyer running the show.  And while that may not equate to immediate success, it will prove to be the more sensible move for the organization moving forward.  Last season, Chicago finished second to last in the division at a 71-91 mark, mainly due to the fact that their rotation failed to produce even after acquiring Matt Garza.  Collectively, they finished with MLB’s sixth-worst team ERA (4.33) and hoarded just 76 quality starts.  Rumor had it that they were shopping Garza this winter, but nothing came to fruition.  With Aramis Ramirez and Carlos Pena now gone, the Cubs will be desperate for power while 22-year-old first baseman Anthony Rizzo gets his feet wet.  Alfonso Soriano and Starlin Castro will remain the only true power threats to start 2012.

Why they’ll finish here: Long-term, the Cubs have as bright a future as any team in the division.  Right now, though, there’s simply too much ground to make up for he pieces that were lost this winter. 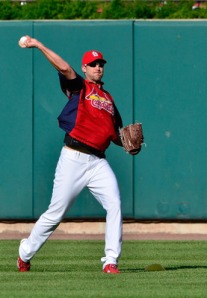 Breakdown: Albert Pujols’ absence will hurt St. Louis’ chance at the division crown, without question.  His importance to the Cardinals’ lineup over the past few seasons has been immeasurable.  However, these Cardinals are still a very potent bunch.  Matt Holliday, Lance Berkman, David Freese all return and with the addition of Carlos Beltran, it’s only inevitable they’ll rank at or near the top of all offensive categories in 2012.

Adam Wainwright, who missed all of last season with a right elbow injury that required Tommy John surgery, be a refreshing addition to St. Louis’ rotation that will return Chris Carpenter, Jaime Garcia, Kyle Lohse and possibly prospect Shelby Miller.

While they’ll finish here: Without Pujols, the Cardinals figure to be a team predicated off their strong rotation and bullpen.  Beltran will prove to be a sumptuous addition but, in reality, does this team have the offensive firepower necessary to take the division? I’ll have to see it before I believe it.

Breakdown: The Brewers cruised to their first division title in franchise history last season thanks to NL MVP Ryan Braun, Prince Fielder and their refurbished rotation.  This year, they look to do the same.  The only difference is they’ll have to do it entirely without Fielder and partially without Braun.  Last season, Milwaukee led the National League in slugging percentage (.425) and second in OPS (.750).  Without Fielder, those figures are certain to drop, though they managed to go out and get Aramis Ramirez to help shore things up.  Yovani Gallardo, Zack Greinke, Shaun Marcum and Randy Wolf make up one of baseball’s best front-four starting rotation.  Greinke’s 3.83 ERA was the highest among the four and if not for his rib injury to start last season, each would have eclipsed the 200 inning mark.

Why they’ll finish here: A team typically known for their slugging ways, the Brewers must figure out how to play small ball in start 2012.  Without Ryan Braun for the first third of the season, it will be difficult for Milwaukee to keep pace with the upper-echelon teams in the division. 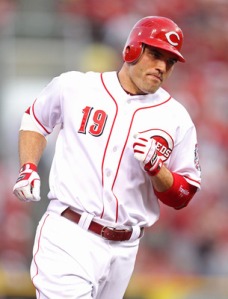 Breakdown: When healthy, the Reds have proven to be a near unstoppable force in the batter’s box.  Between perennial MVP-candidate Joey Votto, Jay Bruce, Brandon Phillips and Drew Stubbs, they’re easily the most well-balanced lineup in the division right now.  But if there’s one clear things that’s limited their success, it’s their pitching.  The Reds finished fifth-worst in team ERA (4.16) and tied for last in shutouts last season.  The addition of Mat Latos will give Dusty Baker’s rotation some much-needed talent to complement Mike Leake, Bronson Arroyo and Johnny Cueto.

Why they’ll finish here: After capturing the division crown in 2010, the Reds’ 2011 campaign was certainly nothing to write home about.  Yes, they’ve been relatively quiet this winter and haven’t added much new talent, but that shouldn’t take away from the talent that’s already in place.  Their offensive firepower will simply be too much for the rest of the division to handle.