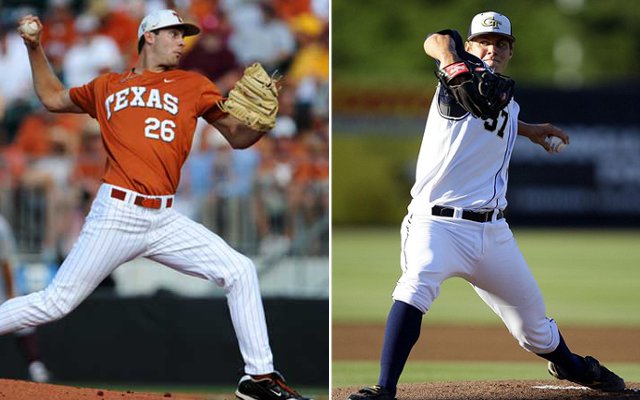 **Read this article on Bleacher Report**

You’d be hard-pressed to find a minor league pitching prospect without his fair share of strengths and weaknesses.  The fact is, every young pitcher is able to excel some area of his game and struggles at another end.

That same philosophy can be applied to the pitching prospects that reside in the Milwaukee Brewers’ pitching-heavy minor league affiliates.  Each top prospect has certain strengths and weaknesses that are able to either facilitate or handicap his respective game.  How each young pitcher is able to balance the two will go a long way in determining his future at the major league level.

What is the single greatest strength and weakness of each top 10 Milwaukee Brewers pitching prospect? 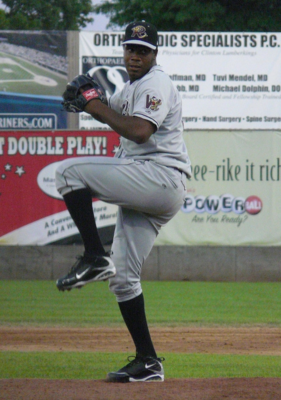 After four pedestrian seasons in Milwaukee’s system, Santo Manzanillo broke onto the scene in 2011 and staked his claim as a real late-inning fire-baller.  His fastball has been clocked in the mid-90s for a while now but he found that he’s capable of running his fastball up to triple-digits.  Manzanillo utilized his potency on the mound last season throughout his 2011 campaign.  In 61.2 innings between high-A and double-A ball, the Dominican native struck out 62 batters and conceded just 44 hits.  If he can stay within himself and maintain his superb velocity in the season’s to come, a big-league promotion could be on the way in the near future.

Like many young, blossoming closers that have come before him, Manzanillo has shown struggles with walks and that was never more evident than after being promoted to double-A ball midway through last season.  While he did post an impressive 2.21 ERA in 20 appearances at the double-A level, he garnered a 5.3 BB/9 and 1.58 SO/BB ratio.  If he has any intention of breaking through to the Pacific Coast league by the end of this season, he’ll need to redeem himself after a disappointing stint in double-A Huntsville. 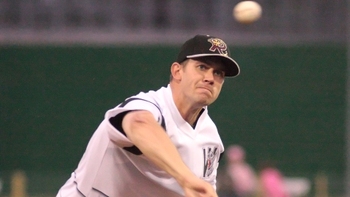 At 6’6″, 225 pounds, you’d expect Kyle Heckathorn to be a real workhorse on the mound with tremendous velocity and above-average command.  Surprisingly, the latter best defines Heckathorn’s game.  He’s been able to limit his walks at an impressive clip thus far in his pro career.  Between low-A and high-A ball in 2010, the Kennesaw State product walked just 33 batters over 124 innings for a 2.4 BB/9 IP ratio and walk percentage of just 6.2.  Those gaudy numbers largely contributed to him being named Milwaukee’s top minor league pitcher of 2010.

Heckathorn has the frame, velocity and solid secondary pitches necessary to become a real strikeout-predicated pitcher at the minor league level.  Though for whatever reason, he simply struggles to get swings-and-misses, and consequently his strikeout numbers are less-than-impressive.  In his breakout season of 2010, Heckathorn punched out just 90 batters and followed that up with a 89-strikeout season in 2011. 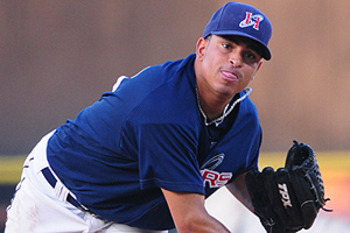 Amaury Rivas is your typical minor-league pitcher.  He won’t blow you away with any pitch and he doesn’t particularly excel in one specific area of his game.

However, he does know the importance of working both sides of the plate and eating as many innings as possible.  Since 2008, Rivas has averaged 136.1 innings, 108 strikeouts and 56 walks per season.  In triple-A ball last season, the Dominican native amassed a career-high 150.2 innings that ranked as the 14th-most innings by any pitcher in the Pacific Coast League.

Rivas has fallen victim to hits throughout his professional career, but last season was easily the most disheartening.  He allowed nine hits per nine innings pitched and saw his WHIP escalate from 1.30 in 2010 to a concerning 1.54 in 2011. 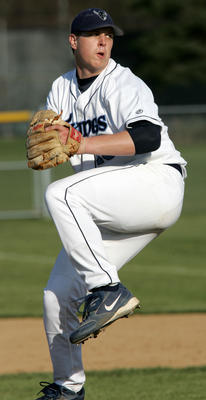 Cody Scarpetta success as a minor league pitcher has without question come from his strikeout abilities.  In 2009, the youngster punched out over nine batter per nine innings pitched and logged an impressive 10 K/9 IP ratio in advanced-A ball in 2010.  His low-90s fastball has been a dull pitch for him but he’s gone to his outstanding curveball in the clutch.  Scarpetta’s breaking pitch has been his signature offering since he broke onto the scene in 2008 and has in turn allowed him to strike out plenty of batters.

While Scarpetta has real upside with his strikeout capabilities, his control has remained unsettled throughout his four professional seasons.  The 23 year old’s command is still a work in progress and that will likely halt his promotion timetable.  As he’s progressed through the system, his walk ratios have increased dramatically.  After a stellar 2008 rookie campaign where he managed a 3.63 K/BB ratio, he collected an abhorrent 1.61 K/BB last season in double-A ball.

The Brewers took Jorge Lopez at 70th overall in last June’s draft and by no means was it an inadvertent selection.  The 6’4″, 165-pound high-school right-hander was rated as Puerto Rico’s top talent of the 2011 draft and boasts a solid mid-90s fastball and tight-curveball combination.  What’s most scary about Lopez’s game, though, is that he still has a ways to go in reaching his full potential.  He’s extremely athletic and if he can add a few more pounds on, he could develop into a real workhorse at the next level.

While Lopez’s growth potential is considerable, scouts have acknowledged that he’ll need to hone his pitches and grow into his body in the coming years.  A multi-sport athlete in his younger years, Lopez will be a project at the minor-league level for likely the first two years of his professional career as he get acclimated with the pace and feel to the minors.  Once that’s accomplished, the sky could very well be the limit. 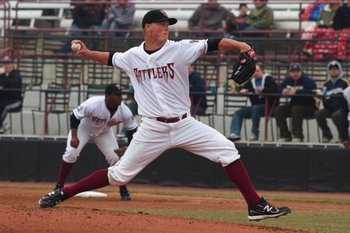 Milwaukee’s second-round pick from the 2010 pitcher-friendly draft, Jimmy Nelson has easily the most projectable big-league frame of any pitcher in the Brewers’ system.  Weighing in at a healthy 6’6″, 245 pounds, the Alabama product exemplifies the value of having a durable, power-packed physique.  Nelson’s big-boned frame has enabled him to touch the mid-90s with his four-seam fastball with consistency.  He also has arguably the best slider in Milwaukee’s system to boot.

There’s a lot to like about Nelson’s game but there’s also a lot to dislike about it.  He leaves the ball over the plate frequently and that in turn has generated some truly unsightly numbers.  In 25 starts last season at the low-A level, Nelson tossed 146 total innings over 25 starts and conceded exactly 146 hits.  Couple that with 65 walks and 13 wild pitches, and there’s definitely some cause for concern with respect to his command. 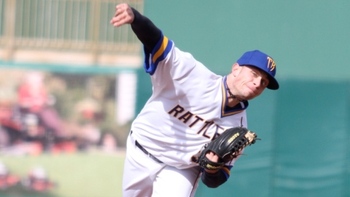 Many would say that Tyler Thornburg’s success as a minor-league pitcher has been a product of his velocity, but I would argue that it’s his off-speed material that has transformed him into a top-caliber pitching prospect.  The former third-round pick out of Charleston Southern can run his fastball up to the mid-90s and has an average curveball to complement it.  His changeup, though, is easily his best pitch and projects to be a real weapon at the big league level.  It has great fade and draws a lot of swings-and-misses.

While it’s true that Thornburg’s game has a lot to offer, his meager frame presents a number of problems.  His 5’11”, 185-pound frame hasn’t allowed him to go deep into games and that could be a chief reason why he’s destined for a bullpen role rather than a spot in a starting rotation.  Last season, Thornburg made 24 starts (12 in low-A ball and 12 in advanced-A ball), yielding 136.2 total innings for an average of under six innings per start.  His clear lack of stamina is a real concern moving forward. 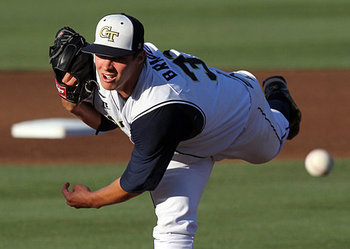 Milwaukee’s second first-round pick from the most recent draft, 21-year-old former Georgia Tech ace Jed Bradley pitches well beyond his years.  He isn’t overly phenomenal at any one specific area and contrary to popular belief, that actually works (and will work) to his benefit as he progresses through the system.

He has the ideal 6’4″, 225-pound build necessary to be a 200-inning starter at the big league level and his three-pitch approach comprised of a low-90s fastball, solid change-up and plus-slider impressed scouts during his college days, where he rarely made costly mistakes.

Many believe Bradley’s smooth 3/4 delivery may be his biggest strength — I couldn’t agree more.  He throws with relative ease and is able to hide the ball with great effectiveness, which adds a considerable amount of deception to his pitches.

That said, Bradley maintains his own fair share of weaknesses that will need to be addressed as he progresses through the system.  Most of his deficiencies are hardly noticeable and shouldn’t take too much time to correct.

The picture above shows one of Bradley’s flaws.  In the picture on the right, Bradley’s hips aren’t able to fully open like the picture on the left.  When this happens, he tends to leave the ball up and away, and in turn weakens his control and leads to more walks.  This isn’t an overwhelming concern and should be fixed quickly, but it nonetheless remains his most significant deficiency. 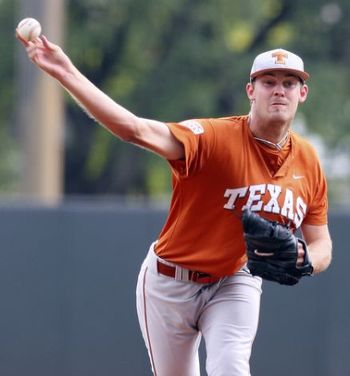 The University of Texas’ junior ace from last season, Taylor Jungmann does everything exceptionally well and it was grueling task just narrowing down his game into one overarching strength.

Aside from his plus-fastball, curveball and changeup, it’s obvious that Jungmann’s greatest strength is his ability to go deep into games.  Last season, he compiled 141 innings over 18 starts for the Longhorns, averaging out to nearly eight innings of work per each start.  His impressive stamina should bode well in his first pro season and into the prospective future.

Truth be told, there’s really no definitive knock to Jungmann’s game.  His 2011 season at Texas was near impeccable and he showed to be above-average in nearly every facet imaginable.

Right now, though, Jungmann’s temporary weakness may be to hone his pitches as he gets set to skip both rookie and low-A ball to head straight to high-A ball.  His impressive fastball-curve-changeup combination was superb at the collegiate level but it will need some time to get settled in professional ball. 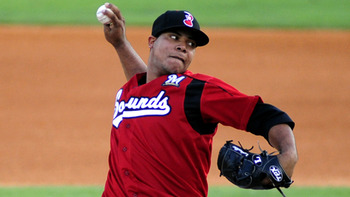 As the Brewers’ top pitching prospect, 22-year-old Wily Peralta does many things well.  He can turn up the heat and touch the mid-90s with his fastball that has nice tailing action and also induces a lot of swing-and-misses with his plus-slider and solid changeup.

As a consequence to his credible three-pitch repertoire, Peralta’s unequivocal strength thus far is his ability to strike batters out.  In 26 starts last season, the Dominican native punched out a combined 157 batters in 150.2 total innings and garnered a strikeout percentage of 32.8 in his brief stay in the Pacific Coast League.

If there’s been one area of concern for Peralta up to this point it’s been his command, thought it showed massive signs of improvements last season.  Between high-A and double-A ball in 2010, Peralta walked essentially four batters per nine innings pitched, enough for an underwhelming 1.63 SO/BB ratio.  He came back and posted a much-improved 2.66 SO/BB ratio last season between double-A and triple-A ball.