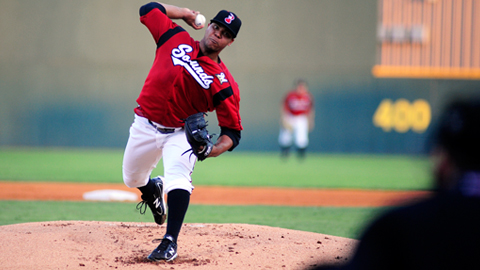 When the Milwaukee Brewers went out and dealt two of their most prominent pitching prospects in right-handers Jake Odorizzi and Jeremy Jeffress two winters ago to the Kansas City Royals (I know, it’s already been that long) in return for former Cy Young Award winner Zack Greinke, it took an unambiguous toll on the club’s top-end minor league talent.  Pre-trade, the Brewers were widely considered to have one of the top systems in all of baseball.  After the trade, though, that wasn’t the case. The exchange left only several young players in their system with any realistic hope of making a difference at the big-league level.

While there’s no doubt that GM Doug Melvin and director of amateur scouting Bruce Seid have their work cut out for them in replenishing their minor league talent in the coming seasons, it’s clear that improvements have been made with respect to the talent already in place. One player who has mitigated the loss of Milwaukee’s former top pitchers on the farm is 22-year-old Wily Peralta.

Signed out of the Dominican Republic as a non-draft pick free-agent in 2005, at the ripe age of 16 no less, Peralta has quietly transformed and developed into quite the young pitcher.  So much so, in fact, that MLB.com’s own scouting expert Jonathan Mayo ranks Peralta as the Brewers’ top overall prospect heading into this season and No. 48 overall in his annual top 100 prospect list for 2012.

After getting some innings against big-league hitting this spring, the Brewers optioned Peralta to triple-A Nashville where he will begin his sixth season of professional ball.  The expectation is that Peralta will have the chance at either a mid to late-season promotion to Milwaukee’s bullpen after roughly a half-season’s worth of work in the Pacific Coast League.  If he impresses, there’s a good chance he could be Ron Roenicke’s No. 5 starter at the beginning of the 2013 season.

With Peralta’s big-league debut almost assuredly coming in the next few months, it’s time to take in-depth look at what he has to offer.

Peralta weighs in at a sturdy yet powerful 6’2″, 220 pounds.  He has a wide frame from his shoulders all the way down to his waste and there’s no doubting he uses that to his advantage.  His burly frame has enabled him to go deep into the majority of his starts at the minor league level and based off what I see, that isn’t likely to change when he breaks through to the big leagues.  He’s been able to grow into his body over the past few seasons and has seen his game improve as he’s picked up the nuances of pitching at the minor league level.  There isn’t much growth left to be had on Peralta’s end, at least in my opinion, though, so what you see now is what you’re ultimately going to get from here on out.

Peralta works out of a high 3/4 arm slot that is exceptionally repeatable.  His plus-average velocity not only stems from his tremendous arm speed, but it is also clearly a product of his ability to through his entire body into the pitch — something that manger Ron Roenicke and pitching coach Rick Kranitz will admire once he’s added to Milwaukee’s bullpen in the coming months.

Everything you need to know about what Peralta brings to the table from a mechanical standpoint is featured in the three snapshots below.  As you can see, he has a superb ability to repeat his delivery on a consistent basis.  From his arm slot to lower-body placement, Peralta has a knack for repeating his delivery.  There are still some concerns on the receiving-end of things with respect to his command, but after posting a much-improved 7.6 H/9 ratio between double-A and triple-A ball season, down from 8.9 H/9 in 2010, it’s clear that his command has developed.

Peralta’s fastball consistently sits in the low to mid 90s, topping out at 97 MPH and on a bad day tops out at 92 MPH.  He has a lot of confidence in this pitch and loves to get batters out with it.  There isn’t much movement on his fastball, which is to be expected given his over-the-top throwing motion.  However it certainly doesn’t lack velocity and that was a big reason for his 9.4 K/9 ratio last season between double-A and triple-A.  There isn’t much more development left on this pitch.

Outside of his fastball, Peralta features two off-speed pitches, of which include a slider and a change-up.  His slider sits in the low 80s and has a good deal of break to it, however, he throws it with too much inconsistency.  His slider could be his make-or-break pitch as he attempts to break through to Milwaukee’s bullpen in the coming months.  Once he develops it, though, it will be a solid strikeout pitch.

By my estimation, Peralta’s change-up is a plus-average pitch.  His repeatable delivery allows him to have good deception on his change-up.  Consequently, batters have a tough time discerning whether or not it’s a fastball or a change-up.  It’s subtle mechanics like that that make Peralta a legitimate pitching prospect at the next level.

Peralta has the physical makeup, solid three-pitch repertoire, experience and hard-working attitude necessary to be a successful pitcher at the major league level.  Many scouts feel, myself included, that Peralta would thrive in the middle-of-the rotation starter.  If the Brewers re-sign Zack Greinke, decline Randy Wolf’s 2013 club option and let go of Shaun Marcum through free-agency next winter, there’s a legitimate chance Peralta winds up as Milwaukee’s No. 3 starter to begin 2013.

Either way, Brewers fans can expect Peralta to make his big-league debut sometime during this season.