Through the first two weeks of the minor league baseball season, there have already been a number of prospects in the Milwaukee Brewers’ organization who have gotten out to a hot start and there have also been those who’ve struggled out of the gates. The season is long, but how a prospect performs early on can be indicative of how well the rest of his season might play out.

After being designated for assignment within the system, each prospect has been able to get his reps in and will be able to build off his early-season production as the season persists.

Question is, which prospects are off to a hot start and which ones has labored through the season’s first two weeks?  Let’s take a look.

After really breaking onto the scene in 2011 as one of Milwaukee’s best young strikeout artists with high-A Brevard county, Thornburg has picked up right where he left last season through 2012’s first two weeks.

Through his first three starts against double-A Southern League hitters, Thornburg has punched out 24 batters in just 18 innings for a scintillating strikeout rate of 36.4 percent. He’s moreover looked much improved from his prior command issues, walking just three total batters.

What’s been most impressive about Thornburg’s blazing start, however, is the way he’s held batters in check. The Charleston Southern product has held batters to a .129 BA, .184 BABIP while allowing just a shade under four hits per nine innings pitched so far this season.

Scouts often say that the jump from high-A to double-A ball is the most strenuous and difficult on young pitchers. So far, Thornburg has disproved that sentiment.

Last season, Fiers was named Milwaukee’s most outstanding minor-league pitcher for his exceptional production both as a starter and his impressive work out of the bullpen. He was added to Ron Roenicke’s 40-man roster in September and made two brief appearances last fall, hoping to have a shot at the Brewers’ 2012 bullpen coming out of spring training.

But after a rather porous spring and subsequent designation to triple-A Nashville, things haven’t gone as originally planned for the seasoned 26-year-old.

In his first three starts against Pacific Coast league batters, Fiers has lasted just 12.1 total innings of work. In that time, he’s conceded 11 runs (10 earned) to cross home plate on 16 hits while walking seven. Granted, he does still hold true to a 10.9 K/9 ratio, however, that should be taken with a grain of salt given he’s pitched just over 12 innings this season.

In a Brewers’ farm system littered with archetypal solid right-handed starters, Nelson and his production has been far too overlooked thus far in his professional career.  But through the first two weeks of this season, however, that may no longer have to be the case.

In his first three starts of 2012, the 6’6″, 245-pound workhorse has looked outstanding in all phases of his game. Development of his changeup this offseason has given him three solid pitches to his repertoire and that has enabled him to work around batters much more. Consequently, Nelson has fanned 21 batters in just 17 innings of work this season and has erased the command issues that many scouts worried would deter his progress.

Farris, 26, has been on the Brewers’ promotion radar in each of the past two seasons thanks to his solid offensive production, defensive versatility and base-stealing capabilities in the upper-minors.  He was promoted to Milwaukee earlier this week but was quickly sent back down when Alex Gonzalez made his way back to the lineup.  The move was astounding, to say the least, given the fact that Farris has struggled mightily early this season.

Now in his third season at the triple-A level, Farris is batting just .179 with a .194 BABIP against Pacific Coast League pitching, all of his hits coming as singles. Lefties have gotten the best of him, holding true to a .125 BA and .222 on-base percentage against southpaws. 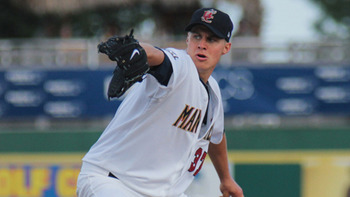 Expectations for Milwaukee’s second first-round pick in last summer’s draft were exceptionally high entering this season. As one of the most highly-productive lefty starters in all of college baseball last season, Bradley had a tremendous amount to live up to early in his first pro year in the Brewers’ system.

So far, he’s lived up to those expectations.

In his first three Florida State League starts of 2012, Bradley has looked phenomenal, conceding just one unearned run to cross home on 10 hits and three walks over 19 total innings. His low to mid-90s fastball, solid curveball and changeup have worked marvelously against high-A hitters and it will be a storyline worth watching as the season progresses.

Schafer was one of the most highly productive players at Brewers camp this past spring, leading many to believe he was on the verge of a possible early to mid-season big league promotion. However, his early struggles this season will likely prolong his arrival in 2012.

In his first season starting at the triple-A level, Schafer hasn’t quite looked himself, particularly at the plate. The Cal Poly product holds true to a .226 BA and .225 BABIP, and while his on-base percentage has been acceptable thus far, his power has not, amassing a slugging percentage of just .358 and .122 ISO.

His defensive prowess has manifested itself early this season, and if he’s able to get his bat going up to it’s normal pace, there’s no doubt he’ll be on Ron Roenicke’s 40-man September roster.

Alec Dopp covers the Milwaukee Brewers as a featured columnist at Bleacher Report.  Follow him on Twitter @alecdopp and read his blog.