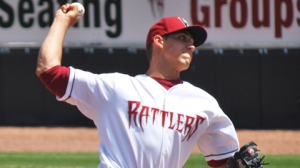 With their 14th-round pick in the 2011 Major League Baseball first-year player draft, the Milwaukee Brewers took right-handed pitcher Jacob Barnes out of Florida Gulf Coast University. A three-year contributor with the Eagles, the 6’2″, 230-pound hurler’s best collegiate season came as a junior in 2011, where over 20 total appearances and five starts he posted a 4.58 ERA, 1.26 WHIP and struck out roughly 11 batters per nine innings pitched.

Quick to sign on with the organization, Barnes began his professional career with Milwaukee’s rookie club in Arizona, where over 18 relief appearances he posted a feeble 2.18 ERA, 1.04 WHIP, .225 BAA to go with a strikeout rate of 36.1 percent, showing he was ready to move up the minor league-ladder.

Finishing out his rookie season in Arizona, Barnes was promoted to single-A Appleton to start his 2012 campaign. Primarily utilized as an extended-inning bullpen arm through the first few months of the season, head skipper Matt Erickson decided to put Barnes in the starting rotation after right-handed starter Chad Thompson was placed on the seven-day disabled list. His decision would prove to be a very intriguing one, as Barnes has now proven over his past three starts that he has some strengths to his game and that he could be an under-the-radar prospect worth watching next season.

I had the chance to see the first of his past three starts on July 23 and have been able to break down his other starts thanks to MiLB.TV. The following is my own scouting report on Barnes.

Body (6-2, 230): A power-pitcher’s frame with a bit more weight to him than other pitchers his height, Barnes has a strong, almost stocky build to him. Not an above-average athlete but is solid in that respect. Has good coordination with controlled body movements, nothing out of the ordinary in terms of his physical tools.

Delivery/Mechanics: Slow and calculated, Barnes’ delivery from the windup is smooth and lacks any noticeable quirk or hitch. Working over the top, he is able to repeat his delivery well; arm slots are duplicated well and release points are consistent. Working on a downward plane and throwing body weight into his pitches, Barnes’ delivery has some effort to it.

Fastball (FB) Movement: Not a whole lot of movement to speak of. Barnes’ four-seamer is extremely flat and doesn’t have much life on it. Can occasionally flash a trace of arm-side run but not enough to the extent of which it should be considered even fringe-average. Grade — 35/40.

Overall Fastball: Lacking any plus-average feature to it, Barnes’ fastball should probably be considered below fringe-average at this juncture. The pitch is extremely flat and lacks any type of run or dive to it, and when he can’t spot it effectively, batters have a natural tendency to hit line drives off it. Can over-use it too much in many situations, doesn’t look to have much projection left on it, either. Grade — 40/45.

Curveball (CU): Doesn’t use the pitch a whole lot and command can be rather spotty as a consequence. Has decent 12-to-5 break to it from the batter’s perspective with very little horizontal movement. Seems as though he could put some more spin on it and generate the “falling off the table” effect with more coaching, as right now it shows more of an immediate bend rather than a delayed one. Will need to refine his command of the pitch before he intends on reaching the upper minors. Grade — 35/45.

Control: Showed very good control in rookie ball last year, walking just under two batters per nine innings pitched. Has run into some control issues this season but is generally always around the plate. Seems to have more control of his offerings out of the stretch than from the windup. Grade — 45/50.

Command: If there’s one big asset to Barnes’ game, it would be the command he has of his fastball. While his curveball lags behind in terms of movement and placement, he’s shown to be able to spot his four-seamer with a ton of consistency; probably a product of his sound mechanics and the fact that he doesn’t overthrow.

Summation: Having just two pitches that he throws with any consistency at this juncture of his career, it will be difficult for scouts to label Barnes as anything more than a solid right-handed relief specialist in a best-case scenario. While he has solid-average command of his four-seamer, it’s still very hittable due to the fact that it lacks life and movement. Add in that his curveball is still below-average right now, and it looks as though he may not break through to the big leagues until his late 20s. From there, my best guess is that he could be that aforementioned middle-inning right-handed specialist out of the bullpen.

Future: His stay in rookie ball was brief, but all signs point to him remaining in the low minors for a while.