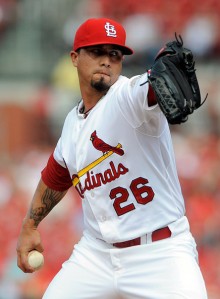 UPDATE: 3/25, 12:11 AM: The Brewers’ 2013 first-round draft pick status has been officially cleared up. Milwaukee’s 17th overall selection will be skipped, not given to the Cardinals. However, St. Louis will attain a first-round compensatory pick in next summer’s draft, FS Wisconsin’s Andrew Gruman told me today.

UPDATE: 3/25, 11:53 AM: The contract is reportedly worth $33 million over three years, according to Bob Nightengale of USA Today. Lohse will become the highest-paid man on the Brewers’ roster this season with a base salary of $11 million.

The Milwaukee Brewers have agreed to terms on a contract with free-agent pitcher Kyle Lohse, according to CBS Sports’ Jon Heyman. Terms and monetary figures have not yet been disclosed to the public, but per Yahoo! Sports’ Tim Brown, it is set to be a multi-year deal. The contract has not yet been signed, as Brown notes via his Twitter page. Lohse is scheduled to report to Brewers camp in Maryvale, Ari., today to undergo his mandatory physical before signing the contract.

The news of this contract agreement comes not even a week after Brewers manager Ron Roenicke had set his club’s opening-day starting rotation. Lohse, 34, went 16-3 over 33 starts last season with the St. Louis Cardinals, posting a 2.86 ERA and 1.09 WHIP while striking out 143 to walking just 38. He finished seventh in National League Cy Young award voting and made a shade under $12 million last season.