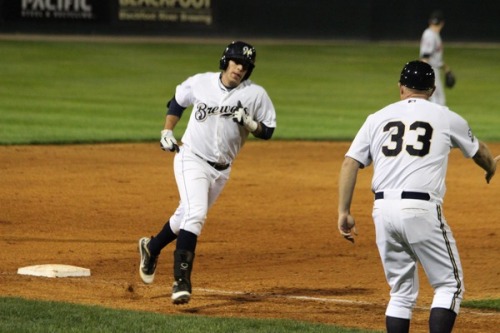 Giacalone rounds the bases for the Brewers’ rookie-level affiliate in Helena, Mon.

Adam Giacalone started from the bottom, and now, he is here.

Over the course of those initial weeks as a member of the organization’s rookie minor league club in Helena, Mon., the drastic changes that came with the changeover from the college ranks to the minor leagues got the better of Giacalone.

The then 20-year-old first baseman sported a paltry .060 batting average, struck out (12) exactly four times more than he walked (3) and registered just two extra-base hits through his first eight games.

That day, he registered his first multi-hit game of this career by going 2-for-4 – albeit in a losing effort. His performance that day sparked a subsequent 16-game hitting streak and helped Giacalone gain back his confidence at the plate for the rest of the season.

By the end of his first professional campaign, Giacalone compiled a .317 batting average, the best mark among all Brewers minor league prospects. He also registered an impressive .394 on-base percentage and hoarded 110 total bases in just 69 games, gaining recognition throughout the system as a talent to watch next season.

Giacalone realizes those early-season struggles helped him become the player he is today.

“I think what made me a better player was those struggles in the beginning,” Giacalone said. “You know a lot more about yourself once you go through the struggles. You figure out what you need to work on and you become a better player.”

Struggling isn’t something that Giacalone is all too familiar with, truth be told.

Growing up in Shawnee, Kan., Giacalone attended Shawnee Mission Northwest High School. It was here where he was first recognized on a national scale for his talent on the baseball diamond and originally grabbed the attention of college scouts across the region.

Aside from posting a batting average above .400 during his senior season, Giacalone also made headlines for his pitching, and with good reason. Twice in the span of 15 days, he tossed two perfect games and issued just two walks over his first 38.2 innings pitched.

After graduating, Giacalone attended Nesosho County Community College in Chanute, Kan., and his production both at the plate and on the mound actually improved.

His freshman season yielded a .396 batting average, 18 home runs and 102 runs batted in at the dish. A 10-1 record complemented by a 2.10 ERA on the bump added to his repertoire as a potential minor league talent.

Dubbed one of the top junior college talents in the country, Giacalone was targeted by a handful of Division I schools.

Then, in November 2011, Giacalone signed his letter of intent to play baseball at the University of Tennessee, with the understanding that he would have the opportunity to be a position player as well as a pitcher – an opportunity seldom presented to college-level players.

“As a pitcher, I loved having the game in my hands,” Giacalone said about whether pitching or hitting gave him more satisfaction. “But as a hitter, there’s nothing better than being in the box and just hitting.”

But before Giacalone had the chance to step onto the field with Tennessee, the Brewers came calling with the 515th selection in last summer’s draft and made him an offer he could not refuse: The chance to fulfill his dream of playing on the big-league stage.

“It was an opportunity I couldn’t really pass up,” said Giacalone. “Tennessee was also a great offer; it’s just that my dream has always been to play professional baseball. It’s every little kid’s dream. So when an opportunity came, it was something I felt I definitely needed to do.”

Giacalone’s standout first-season with the Brewers’ system earned him a promotion to the Wisconsin Timber Rattlers, the club’s low-A minor league team. He is scheduled to remain with the club’s spring training facilities in Maryvale, Ari., for a few extra weeks and expects to make his first appearance in Appleton around the start of May.

Though he has not thought about it all that much, Giacalone said that playing hard and having fun are two things he most wants to accomplish with the Timber Rattlers in 2013. Moving up the minor-league ladder is extra incentive.

“Playing professional baseball is something you have to enjoy,” Giacalone said. “You have to play hard every chance to you get. This isn’t going to last forever.”